Hashing . . . a mixture of exercise, tomfoolery, and delicious beverages. It combines running, orienteering, and partying!

Hashing began in Kuala Lumpur, Malaysia, in 1938, when a group of British colonial officials and expatriates founded a running club called the Hash House Harriers. They named the group after their meeting place, the Selangor Club, nicknamed the “Hash House,” a British term for a “greasy spoon.” Hash House Harrier runs were patterned after the traditional British paper chase. A “hare” was given a head start to blaze a trail, marking his devious way with shreds of paper, all the while pursued by a shouting pack of “harriers.” Only the hare knew where he was going . . . the harriers followed his clues to stay on trail. Apart from the excitement of chasing the hare and solving the clues, reaching the end was its own reward . . . for there, thirsty harriers would find a tub of ice cold beer.

Hashing hasn’t strayed far from its Kuala Lumpur roots. A typical hash today is a loosely-organized group of 20–40 men and women who meet weekly or biweekly to chase the hare. We follow chalk, flour, or paper, and the trails are never boring . . . we run streets and back alleyways, but we also ford streams, climb fences, explore storm drains, and scale cliffs. And of course we drink beer!

On-On!: typically heard when you’re on the right trail

GM: Grand Mattress in charge of our sorry asses

Circle: A celebration after the hash for accusations and down-downs

Down-downs: punishment for stupidity on trail

R*cism: talking about real running events; not permitted at a hash

On-After: a place to meet following the hash; usually for sustenance and more beer 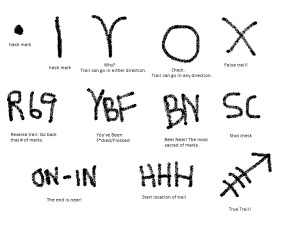 A Drinking Club with a Running Problem